Wondering about translations?
Back to Miss Translation 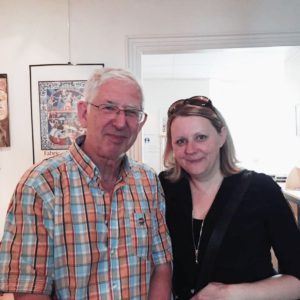 Have you ever been to Paris? Even if you haven’t, I’m sure you still know it fondly as the city of love.

Yet my experience of Paris is not a memory filled with sparkling lights, romantic honeymoons or buttery croissants. It’s a story that I rarely tell. It’s a story of an 18-year-old refugee. It’s sad and dark in places and contains quite a few twists and turns but this story has a happy ending.

In 1985 I was living in Paris, having arrived from communist Poland with my father. We left Poland illegally on an organised trip, whilst my mother and younger brother stayed behind as we weren’t allowed to travel together. Australia was our planned final destination but we were told to seek asylum in a third country first.

Within days of my arrival in Paris, my parents’ marriage fell apart and I found myself alone, penniless and desperate. I contacted a Jewish organisation for help whilst I waited for my visa to Australia. During this time, they fed, supported and housed me and even paid for my plane ticket to Melbourne. I often thought of them but never had a way to find the organisation again. Life got in the way, memories faded.

A couple of years ago, I arranged to meet up with an American client of ours who lives in Paris. Christine was a translator and academic with an interest in Yiddish and Jewish culture. We had lunch together and thought we’d look around to seek signs of Jewish life in Paris.

On our small adventure, we passed a building with no signage or a bell, which was supposed to house a Jewish community centre. Someone let us into the courtyard. We walked around aimlessly before finally deciding to call the number on their website. “Oh yes”, they said, “we’ll buzz you in.”

As I was walking up the stairs, I got an intense sense of deja vu, but it wasn’t until the doors opened that I felt I had been there before. After a warm welcome from the staff, we spoke to the president, who confirmed that this was the place where Mr Rosenberg and his assistant Madame Anne had their office in the 1980s.

“They’ve both died some years ago”, I was told. Yet, as he spoke, I remembered them so vividly. Mr Rosenberg was a pragmatic busy man who was always wearing a suit and Madame Anne was kind and helpful. I can still remember her raising her eyebrows ever so slightly at the news that I was pregnant, then swiftly moving onto the practicalities of how to hide my belly at my appointment with the Australian consulate.

Today, the building is called Centre Medem, housing a library, community centre and various classes for children and seniors. The layout is the same but it’s been recently renovated. The only thing remaining from the original fixtures is the beautiful, old parquetry floor.

A lot has happened since my first experience of Paris and it wasn’t all positive. But now I run my own business which delivers language services to people all around Australia. We are constantly working towards improving communication with multicultural communities. Just this week, I was honoured with the Refugee Business award from the Victorian Multicultural Commission. Moving forward, I hope to continuing contributing to this space and help those who find themselves in a similar position to 18 year old me.